This evening at Fort Belvoir, the commander of the National Capital Wing, Col. Bruce Heinlein, presided over a change of command ceremony. In front of a cadet formation and assembled senior members, Col. Heinlein extolled Mount Vernon Composite Squadron’s performance, and the outstanding work of Lt. Col. Lou Volchansky who has had command for 25 months. Volchansky was presented the CAP Commander’s Commendation Award prior to the traditional passing of the squadron guidon.

The departing squadron commander and the new commander, Lt. Col. Brian “Irish” Porter, both delivered remarks during the ceremony.

Lt. Col. Volchansky is an instructor pilot with CAP, and a retired U. S. Air Force officer.  Lt. Col. Porter is an active duty officer in the U. S. Air Force and prior to taking command of Mount Vernon Composite Squadron had held the position of Deputy Commander for Cadets.

A change of command is a military tradition that represents a formal transfer of authority and responsibility for a unit from one commanding officer to another. The passing of colors, standards, or ensigns from an outgoing commander to an incoming one ensures that the unit and its members is never without official leadership, a continuation of trust, and also signifies an allegiance of members to their unit’s commander. Great symbolism is attached to the ceremonial aspects of a change of command.

If you move your cursor over the certificate below, you’ll have access to additional pictures of the evening’s ceremony.

Questions, suggestions and comments are always welcome. Navigate to our home page via the tabs above for contact information. 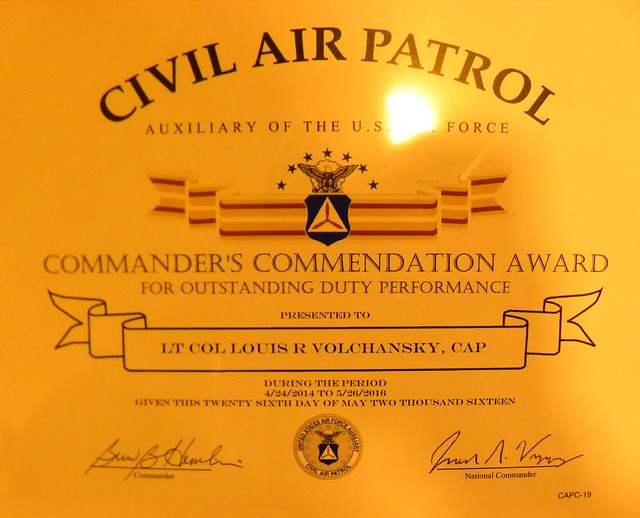